“This is an interesting and tumultuous time to be in Tel Aviv – weekly citywide protests over economic and housing conditions have engulfed and tensed the ordinarily laid-back city, and a large influx of Sudanese and Eritrean refugees has sparked riots and led to increased violence, a surge of active TB cases, and a measles outbreak. While working in the emergency department of Sourasky Medical Center, Tel Aviv’s major trauma hospital, and with the mobile intensive care units of Magen David Adom, Israel’s national EMS organization, I have had the opportunity to witness much of this firsthand. Over the past several weeks, I have seen two cases of measles in the pediatric ER, responded to calls with Magen David Adom ambulances in the poor southern region of Yaffo, and attended a protest late one Saturday night where a man set himself on fire. I have also had the opportunity to meet with the heads of disaster preparedness and EMS in Tel Aviv to discuss Israel’s emergency response capabilities and organization just days before a terrorist attack sprung that system into action in Bulgaria. All of this time, I have worked alongside Israeli medical residents, medical students, and paramedics, sharing stories and comparing experiences, academics, and training systems between our two countries. Spending a month in Israel has been an amazing experience and I’m looking forward to building on the relationships and continuing the exchange between Israeli and US physicians.” 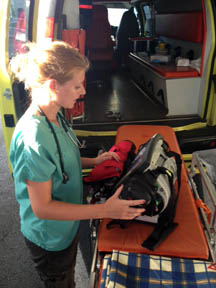